In this consumer age, almost any white hat is called a Panama, and this is far from the truth. It is illegal, misleading and downright confusing. It's like selling a polyester tracksuit as hand-woven silk.

For more than 7000 years the Ecuadorians have been weaving Panama hats from a sacred palm tree - known as the Toquilla palm. Using an ancient, time-consuming process, they transform the organic leaves into exquisite hand-woven hats.

In the 18th Century, these hats were exported across the world via the Panama canal, which is how they came to be known as the Panama hat. The Californian gold rush created the first huge wave of Panama hat buying. To the chagrin of the Ecuadorians, their most famous artwork is named after another country.

Why does it matter if it is a genuine Panama? It is the difference between a bespoke tailored linen suit, and a polyester tracksuit. They are comfortable, breath beautifully, are expertly crafted, elegantly shaped, biodegradable and the best possible hat for a hot summers day. They are the real thing ...... in a world of cheap copies.

To further your exploartions, have a look at  How to recognise a genuine Panama hat. 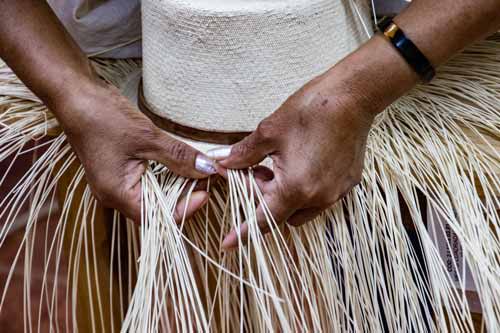